Solar power is a source of energy derived free from the sun, with the advance in science and technology solar energy has become an alternative source of energy that has been used to drive all sorts of electric powered devices and machines.

One such utility powered by solar energy are the solar-powered boats, as the availability of solar cells became popular in the recent years, it has also made possible the creation of solar boats that are both quieter to run and eco-friendly as they do not pollute the environment. 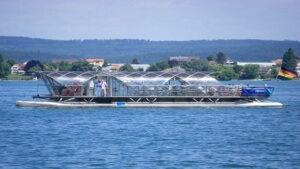 Constance Solar Shuttle is yet another solar boat created by SolarLab and operates on Lake Constance one of the famous tourist’s attraction sites in Europe.

The lake borders Germany, Switzerland and Austria and cruising through it with Constance solar shuttle offers an ultimate opportunity to visit one of the fascinating sites in central Europe.

This beautifully designed solar-powered boat can ferry up to 60 passengers and since it began service at Lake Constance, it has increasingly become a tourist attraction.

It has an electric engine that drives it, and it obtains its energy exclusively from the sun via the solar cells that form part of the boat’s roof. There are batteries under the deck that ensures that the boat continues with its services even when there’s cloud cover or at night without any disruption. 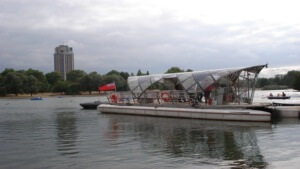 As its name suggests, the serpentine solar shuttle during its launch operated on the Serpentine Lake in London’s Hyde Park. This advanced and prestigious solar and eco-friendly boat was designed by SolarLab’s founder Christoph Behling.

Some of the great features of this magnificent piece of art are that it runs quietly and entirely pollution-free.

The Serpentine Solar Shuttle is considered one of the most advanced solar boats in the British waters, and it is used to ferry passengers with a capacity of up to 42 passengers. It is a slow-moving boat cruising at an average speed of 5 Mph in all daylight conditions. 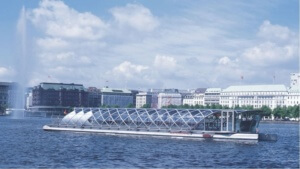 Designed by SolarLab, Hamburg solar shuttle is much bigger than both Serpentine and Constance solar shuttles. It was built in 2000, and it is considered one of the world’s largest solar-ferry with a carrying capacity of up to 120 passengers.

Cruising in front of the magnificent looking Hamburg landmarks, this fabulous machine has become a tourist attraction. When utilizing solar power without the use of reserve power given by the batteries, the boat can attain a speed of 5 km/h. 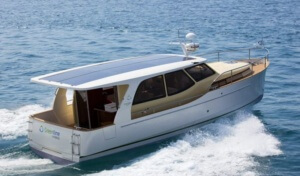 The Loon is a kind of a Solar Pontoon boat that is very economical as compared to fuel-powered boats of its size. The loon is capable of carrying a maximum of 8 passengers and gets its energy from the sun which means on an ordinary sunny day, the cost of running it is free.

On an overcast weather, the boat has a reserve power from eight 6-volt batteries that will keep it operational with a speed of 6 mph the whole day.

During the nights, the loon is capable of being plugged into an external power source to recharge its batteries. While full, the boat can cruise for another 30 to 40 miles before requiring yet another charge. 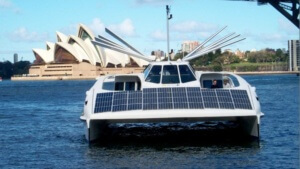 Solar Sailor Sun Sails utilizes an ingenious way of tapping both solar energy and the wind energy as a source of power to drive the boat.

The boat is fitted with sails that have photovoltaic (PC) cells installed on their surfaces to trap the solar energy.

Perhaps the most interesting feature of the Solar Sailor Sun Sails is that it has a computer that automatically positions the sails for maximum wind and solar efficiency. Using this technology reduces the amounts of fuel consumed and hence lessens the cost of running. 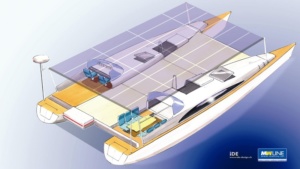 This catamaran solar-powered boat is 14m long and 6.6m wide and can accommodate 5 to 6 passengers for long journeys.

However, it has ample room for more persons for shorter visits or excursions.

It is important to note that the crew of the Sun21 was awarded the world Guinness record for being the only solar-powered boat to have made the fastest transatlantic crossing by solely depending on solar energy. 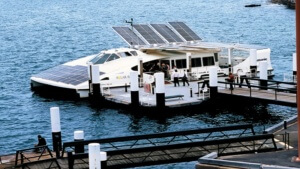 Solar Sailor Hybrid boat is a more advanced catamaran boat by Solar Sailor; it is designed to use the power of the wind, solar power, as well as fossil fuels for propulsion.

The wing-shaped solar panels on top of the boat can be oriented to trap the wind. Both forms of renewable energy sources can be used simultaneously.